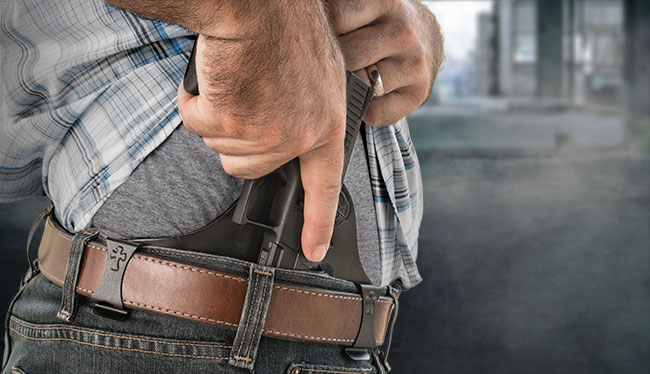 Philadelphia, Pennsylvania – An armed man was shot and killed Monday afternoon when he attempted to rob a Metro PCS cell phone store.

Philadelphia Police Department (PPD) Capt. Scott Drissel said officers were called to the store location at 70th and Elmwood St. in South Philadelphia for reports of gunfire at 4:10 p.m.

“When they arrived on scene, they were met by an employee of MetroPCS,” Capt. Drissel said.

After reviewing the store’s surveillance footage, Police say it was clear the employee was acting in self-defense.

The video shows an unidentified man wearing a hoodie enter the store at exactly 4:03 p.m. and pull out a semi-automatic pistol. He shows the weapon to the employee and tosses a crumpled-up bag onto the counter, reportedly telling the clerk to fill it with smart phones.

Seemingly confident he was in complete control of the situation, the suspect turns away from his victim for just a moment, perhaps to confirm the employee was indeed the only one in the store.

Seeing his opportunity, the employee, who police say is not only licensed to carry a concealed weapon but a Marine Corps Reservist as well, acted.

He drew his own pistol from the holster on his belt and opened fire on the suspect.

“He discharged his firearm at the robbery suspect numerous times, striking him,” Capt. Drissel said.

By 4:12 p.m., just 9 minutes later, officers arrived, and medics had pronounced the suspect dead at the scene.

A popular target for criminals, this is not the first time this Metro PCS store had been robbed.

In fact, this robbery would have made for the third time the store had been robbed.

So many times that a logbook was placed at the store for officers to sign after frequent checks on employees. Though police say they do not know at this time if the deceased was involved with those robberies as well.

“There is police logbook in there. Officers will typically go inside the store and meet with the employees there and sign the logbook,” said Capt. Drissel.

There have been no reports of charges filed against the employee, but police say the investigation is ongoing.

Things the armed citizen did right:

Good self-defense takes practice and training to help you come out on top. Read here for an article by Jacob Paulsen on, How to Draw a Gun from Concealed.

What other lessons could be learned from this tense situation?