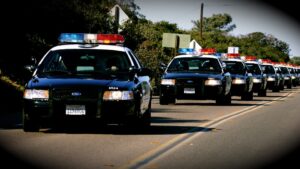 Hummels Wharf, PA — A man named Christopher Fernanders stalked a woman named Heather Sue Campbell and even wrote a letter that he addressed to police about how he was going to kill her before actually carrying out his plan.

The woman and a man she was on a date with at a Buffalo Wild Wings, named Matthew Bowersox, were finishing up their night and gave each other a hug according to eyewitness reports. Shortly after that time, the alleged murderer drove up in his pickup truck, exited it with a handgun, and started to shoot at the couple.

There were two people in the parking lot when shooting erupted who were able to detail the event. One person said she saw Fernanders shoot several times at Campbell, who was screaming, while the other witness saw Bowersox run to the restaurant with the suspect following. They heard three or four more shots.

At some point after Fernanders shot Bowersox and while he made his way back to his truck, Troy Sprenkle of Sunbury left the restaurant and shot Fernanders three or four times leaving him in critical condition.

The story gets more complicated the further we dig.

The days leading up to the actual shooting, Campbell filed a protection order against Fernanders after he threatened her life. He was subsequently charged with terroristic threats and harassment, and was due to go before a district judge at some point this week.

According to the Snyder County DA, Michael Piecuch, the protection order should have kept Fernanders from obtaining the firearm he killed the couple with but bad people will always go around the law to commit their crimes. The source article stated that there was “equipment used to make a firearm at his home.” While it’s unclear what that means, it could have been an 80%.

The letter he left to police detailed the entire murder plan, showing premeditation. Taking the stalker thing to the next level, he put a tracking device on the undercarriage of Campbell’s car to know her movements. The car parked at the Buffalo Wild Wings is the one that had the tracking device.

Fernanders now faces some serious charges, including two counts of first-degree murder, stalking, firearms violations, violation of a protection order, and others. At last report he remained in serious condition at the hospital from the injuries he sustained from the good Samaritan who shot him.

It’s also important to note that there is no mention in any of the source articles I used to document this one about whether or not the good Samaritan would be facing any charges or not for shooting the alleged murderer [potentially] in the back as he walked back to his truck once he was done.

Also noteworthy is the fact that Buffalo Wild Wings does not “allow” firearms within their walls, but “no gun” signs on private establishments in PA do not carry the weight of law, at least to my knowledge from when I lived there more than two years ago. Always check the local laws.

Once the alleged murderer is released from the hospital he is set to be arraigned and sent to jail without bail.