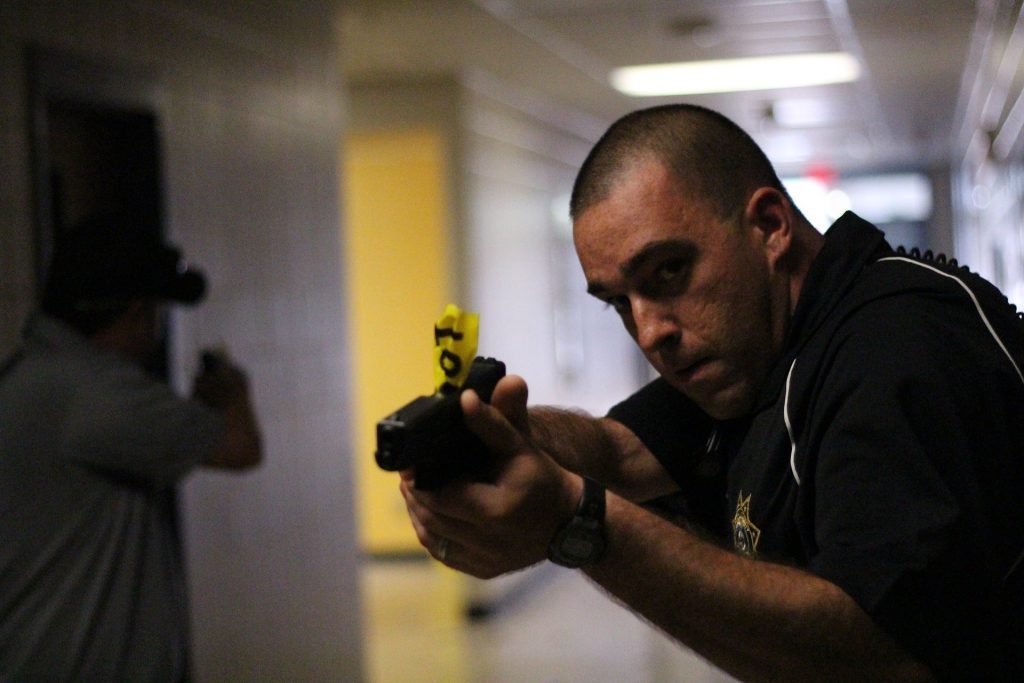 A Philadelphia grocery store owner used his sidearm to defend himself last Thursday against an armed, masked man.

53-year-old Elvis Nuñez was about to close up his 54 & Wyalusing Food Market store for the night when a man wearing a black mask stormed through the door with a handgun trained on him.

“I opened the register and was counting the money, but the guy in the mask took one shot at me right away,” said Nuñez.

The store owner ducked behind the counter and drew the pistol he keeps in a holster on his hip. When the would-be robber saw this, he backed up to the door, keeping his weapon trained on where Nuñez remained behind cover.

Nuñez fired at his attacker, striking him in the abdomen. The wounded criminal then fled the store and turned to fire his gun two more times at his would-be victim as he ran.

Meanwhile the store owner locked the door and waited for police to arrive.

The unidentified gunman was taken into custody by officers and transported to Penn Presbyterian Medical Center where he was pronounced dead later that same night.

Nuñez, a father of five, told Philly.com that he’d rather not carry a gun if he didn’t have to and certainly didn’t want to shoot anyone, but,

36-year-old Qiana Grant, a regular of the store whose daughter was in the building during the shooting, said,

“Papi (Nuñezs nickname to his regulars) I know if he had to shoot somebody, he had to do it. (He) is a nice guy, very easygoing. There’s times I come down here with nothing. If you just talk to him, you get what you need. He’ll help you feed your kids. He’s cool for the neighborhood. He’s been around here for years, watching my children grow up and a lot of other people’s children grow up.” said Grant.

Nuñez, who was robbed at gun point in 2010 and his wife in 2016, told Philly.com that he regrets a man lost his life during the robbery, but praised police for the swift action of taking the gunman to the hospital.

The store owner had this to say to anyone thinking of committing violent robberies:

“It’s a big mistake. You put yourself in danger, you put somebody else in danger, and you can go to the jail. Go to the classroom. You are living in the U.S.A. I come from a poor country. Everything is different over there. You have opportunity here,” he said.

“You will see that you can survive honestly and good. Stay out of the gun problem, the drugs, the alcohol. Focus on yourself and your family.”

As we can see from this case of self-defense that even a mortally wounded attacker can still pose a legitimate threat. Read here for an article on the Physiology of Stopping the Threat.

What lessons do you think can be learned from this shooting? Leave a comment below to let me know.

Read our unbiased chart comparing the major self-defense insurance companies to find out who is best for you.

One Response to Store Owner Returns Fire, Wins Fight for His Life