Join Our Newsletter
Shop Our Store
MAIN MENUMAIN MENU
By Craig Martin on June 6, 2017 in Uncategorized 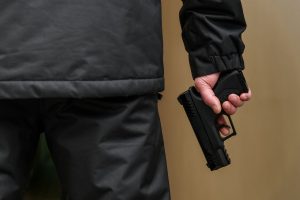 On Sunday morning, at around 2:30 AM, Lancaster police were called to the scene of a reported shooting on the 600 block of Marietta Ave. What they found upon arrival was a shaken up husband and wife, with a wounded criminal bleeding on the floor.

The husband and wife, for their own safety, declined to have their names released but were taken to the local station for questioning after the husband stated that he had shot the intruder, 46-year-old William Louis Stewart after Stewart had broken through the front door of their house.

According to the male homeowner’s account of the incident, he was upstairs sleeping, as his wife was down on the first floor of the house. The man was then shocked awake when he heard a cacophony of noises, including the front door being kicked in and his wife’s cries for help.

Thinking quickly, the man then grabbed his handgun and moved downstairs, where he saw Stewart rampaging through the front door, picking up a piece of wood.

As Stewart moved closer, the man pointed his gun at Stewart, and fired one shot, directly into his chest.

At that point, the man’s wife called 911 to report the incident as the man remained ever watchful of the criminal laying on their floor.

At this point, there is no word on if the homeowner will be charged for the shooting of Stewart, but it is known that Stewart himself will be charged with burglary, criminal mischief, and simple assault, after he makes it out of the hospital, of course.

Is your home gun ready? Do you think that you would have the same reaction as our shooter in the story? Would you have done anything differently yourself? We’d love to hear your strategy and take on this in the comments below.

Pennsylvania School Staff May Soon be Able to Carry in Schools
Robber Brings a Knife to a Gun Fight, The Ending is Pretty Obvious